“Behold, my friends, the spring is come; the earth has gladly received the embraces of the sun, and we shall soon see the results of their love!” –Sitting Bull

Spring has finally arrived. Flowers are blooming and the sun is warming up the earth after a long, hard winter. (Despite the fact that today is rainy and 40 degrees, but New England spring is often up and down for a while) When we moved into our house last year I decided to spend the year watching the existing garden to see what we wanted to keep and what we wanted to replace. Over the course of the spring and summer we discovered there was a massive wild perennial garden in our front yard. I think if we were working with acres of land, something this wild and tall could be lovely. By summer’s end, the garden towered over the kids! Many pieces of the garden were beautiful, but overall it was a little too much for me as a novice gardener and not quite my aesthetic. We have a tiny urban yard and I felt the need to have something a little neater and lower profile. So as the garden season was coming to a close last year, I began to dig up the plants that we were not interested in to start with a blank slate for this spring.

The “after” shot once we cleared out in the fall

I knew I wanted to start with defined flower beds that also created a path through the middle of the yard. It pleases me to have a place for things and everything in its place and I wanted this to play out in my garden, as well. Growing up, this was how my parents always created their gardens and it feels like the natural way to do it. Several weeks ago, Big Brother and I started measuring and planning out where we wanted the bricks to go. We have both been extremely eager to get the garden going so on one of the first warmish days we set out to pick up the bricks for our borders. We’re on a super tight budget so we picked simple, cheap concrete bricks. The boys loved helping load the bricks on the cart and “help” push it along. 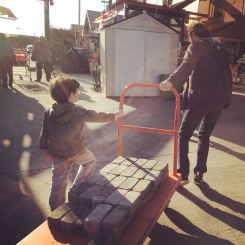 Despite his enthusiasm leading up to putting our new bricks in place, Big Brother turned out to be rather distracted when it came time to actually help put the bricks in. I had his help for maybe 10-15 minutes and then he was all done. While digging in the dirt, we unearthed a number of rollie pollies. This was Big Brother’s first encounter with these little guys. I have super fond memories of collecting, watching and playing with them as a child. So while I continued to place the bricks, he split his time between chilling on the porch and creating a new home for his rollie pollie in a plastic bottle. He loved collecting sticks, grass, and leaves for his new friend. This of course has launched a new fascination with creatures we find in our garden. So we’ll be exploring and researching more information on this crustacean. (I had no idea that these guys were in fact not insects! They are more closely related the shrimp & crayfish and actually breathe via gills!)

Once the path and borders were set, I started researching what plants we wanted to put in our garden.  I want a lot of color in my garden and so I have been searching for plants that either have long blooming flowers or plants with colorful leaves. I also want mostly perennials but will likely throw in a few annuals here and there. Finally, I want to move slowly so that I can give my garden time to develop on its own and not put in too much at one time. It is all a work in progress. My knowledge of plants, growing them and even types to choose from, is very limited. Half of our garden gets a fairly significant amount of sunlight and the other half is part shade. I turned to my friend Google, as well as my neighbor who is a landscape architect to guide me. My searches included: hearty perennials, easy perennials, and long lasting blooms. I came up with a number of ideas but then I went to the garden shop and was immediately overwhelmed and distracted by the thousands of other options before me. The first plant I stumbled upon was the Jewel of the Desert, which claimed to be a sturdy perennial with a long bloom. Bingo! Just what I wanted. I started with two, but I like the way they look close to the border of the garden so I may be picking up a few more. During my Google search, the Heucherella plant kept popping up as a hearty perennial that offers a lot of color options. While at the garden shop, I found three colors that I liked: Sweet Tea (a nod to my southern roots), Solar Eclipse, and Fire Chief. I really love that their leaves will provide nice color all summer long. We have left a handful of flowers from the previous garden such as Daffodils, Tulips and a few Irises. There may be more still there, and we’ll find out as the spring and summer rolls along. Meanwhile, Big Brother is super focused on getting as much yellow and orange (his two favorite colors) into our garden as possible. He has big plans for some sunflowers and has his seed packets ready to go. I’m not too certain that we can pull them off because I don’t know if we have enough sunlight, but we’re going to give it a good try! I’ve been thinking about adding some Blanket Flowers, Black-Eyed Susans, and a few Hostas. I would also love to find a spot for a Hydrangea but we may be running out of room. I picked up a few annuals to go at the foot of the stairs and on the steps, as well. 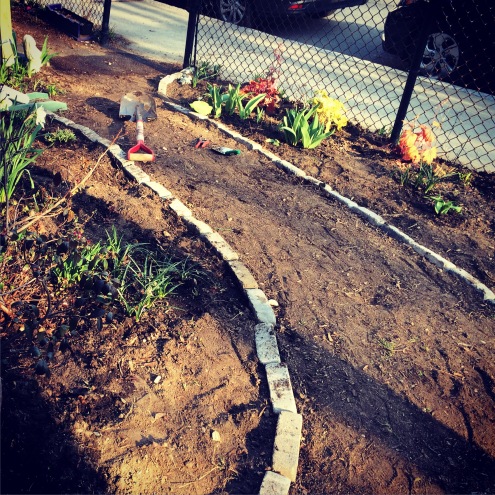 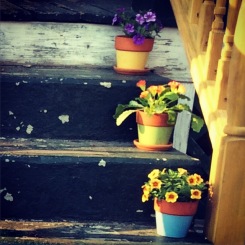 Finally, Little One and I went back to another garden shop to pick up a few garden statues that we had been eying the week before. There were lots that we loved, but for this trip, we picked up the large nose man and big/little brother turtles. Little One can NOT walk through the garden without honking the mans nose and rearranging the placement of his little brother turtle. He also must greet and say goodbye to his turtle, sometimes 3 and 4 times, before entering or leaving the garden. Keep in mind, we walk through our garden MANY times a day as it is right next to the front door. Once or twice Little One’s routine is adorable, then it begins to test my patience. Deep breaths, Mama. Toddlers require a lot of zen to stay calm. 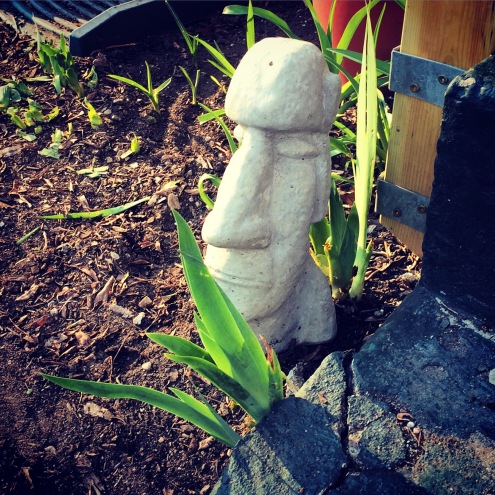 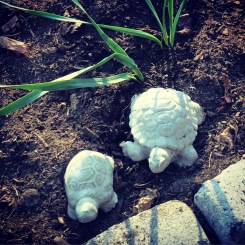 Little One helping me at the garden shop

How does your garden grow? I would love to hear feedback on plants to try, advice for what we’ve chosen or your experience with gardening in small spaces.

2 thoughts on “How Does Your Garden Grow?”