“New York, concrete jungle where dreams are made of
There’s nothin’ you can’t do
Now you’re in New York” –Jay Z

This semester my husband has traveled a lot for work. The amount he travels comes in waves. Thankfully, he just sent a draft of his second book off to the publisher for review so I’m hoping that means he’ll slow down for a little while and we can all catch our breath. When he said he had a conference at NYU, I immediately decided that rather than endure another solo parenting weekend at home, we would come with him to enjoy the big city. Big Brother was so excited to go. He has been to NYC before, but not recent enough to actually remember the trip. Yet for some reason, just the idea of going to the city sounded like a grand adventure and he began counting the days until we left. Leading up to our travel, whenever anyone came over to visit, he would immediately lead them over to the calendar and show them how many days it was until our trip.

Checking out the model trains

Watching the world go by

Friday finally arrived and Big Brother was giddy all the way to the train station. We ride the subway train all the time but there was something about this train ride that sent him over the moon. Both boys were glued to the window. When we arrived in the city, my husband had to head to his conference so the boys and I took the train into Brooklyn where we had rented an awesome apartment in Park Slope via airbnb. This is my favorite way to find accommodations when traveling. I find it greatly improves the travel experience, especially for families. Having a real home to retreat to during travels with a full kitchen, proper bedrooms, and space to stretch out makes a big difference. This enables us to keep routines and nap times somewhat on track so there isn’t too much disturbance in schedules. The apartment was in a perfect location. It was just steps from the subway, Prospect Park and tons of coffee shops, restaurants and shops. We were able to slip into the neighborhood and feel like Brooklyn locals in no time.  After settling in, we went for a walk around the neighborhood, did a little grocery shopping, and then spent the rest of the afternoon enjoying the park. Prospect Park is amazing. We only managed to explore about a third of it during the afternoon. We played with the echo in tunnels, ran circles around the big, grassy lawn, and enjoyed the gardens and flowers. The love between these two just melts my heart these days. It is rare to walk anywhere when they are not holding hands. I’m trying to gobble up all this sweetness while it lasts! Big Brother stumbled upon a tree stump that reminded him of the stump in The Giving Tree

, one of his favorite books. He climbed on and said, “See, it’s straightening itself up just for me, just like in the book!” 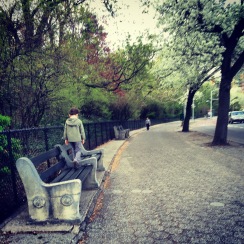 As luck would have it, our first night in NYC was met with high fevers and no sleep for both boys and my husband. Thankfully, I had already explored and familiarized myself with the neighborhood that afternoon, so when I had to go out looking for ibuprofen at midnight, I already knew where to find the closest pharmacy. The next morning my poor husband had to drag himself to give a talk at the conference with a fever. Meanwhile, our morning wasn’t as activity-filled as I had planned given everyone’s state. The boys and I had a slow morning hitting the local coffee shop and a few toy stores, along with every other young family in the Park Slope neighborhood. Turns out, if you’re in your 30/40s and have kids, you MUST live in Park Slope. Just an everyday Saturday morning looked like a stroller convention was in town. Needless to say, we fit right in. It wasn’t the sight seeing tour I had hoped for, but it was fun to experience an average Saturday morning in Park Slope. With even the short walk around town, the boys’ fevers were shooting up again so with a few prized toys from the shop, we headed back to the apartment to relax until my husband was done with his conference for the day.

By the afternoon, everyone was rested and ready to see some more of the city. We had the pleasure of meeting up with and spending the afternoon with a dear friend we haven’t seen in a while. Before the boys got sick, we had grand plans of trips to the zoo, museums, and other city adventures but we opted for a more easy-going sight-seeing tour to accommodate everyone’s state. We took the train up to Dumbo (Down Under the Manhattan Bridge Overpass), the kids played at the Brooklyn Bridge Park, rode the carousel, and watched the ferries come in under the bridge. Big Brother was so enthralled with the ferries (seen in the picture at the top of the post) and begged us to take a ride, but the day was getting away from us and energy levels were low so we promised him a ride sometime this summer. 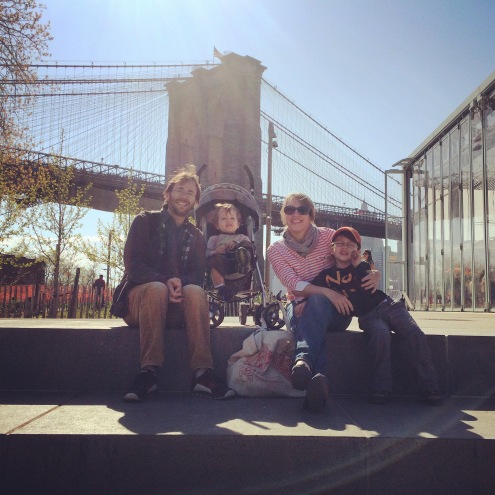 Family portrait under the bridge 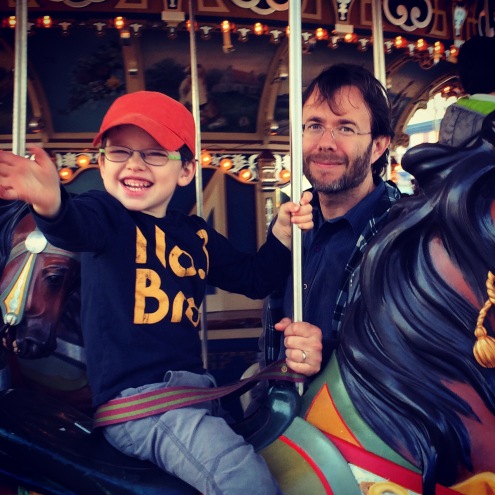 Our final day in the city, everyone was still rather sluggish given we had another night of high fevers and disturbed sleep. Determined to do at least one thing on our NYC to do list, we headed over to the American Museum of Natural History. My husband had read on their website they have a gigantic room with models of the planets, plus some moon rocks that we thought Big Brother would enjoy. We discovered that this museum is overwhelmingly large, but managed to locate the planets, see a few dinosaur bones and a few pictures of the moon before our crew totally lost their steam. Big Brother insisted on getting a photo with is two favorite planets, Jupiter & Saturn. I think the dinosaurs would have been more exciting sans illness/fever. It was a lot of walking for little ones with a virus.

Photos of astronauts walking on the moon 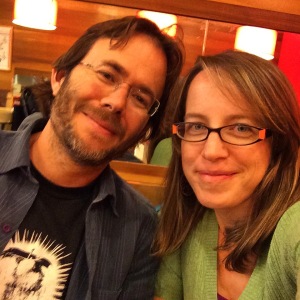 In the final hours of our NYC adventure, my mother in law came in town. She was there to also give a talk at NYU the next day. I was so grateful to have a grandparent swoop in to give us a short breather. Trying to nurse 3 sick family members, while traveling in a hustle & bustle city is a lot of work. So when she offered to take the kids for a few hours so that my husband and I could have a second to ourselves, I didn’t hesitate in the slightest to take her up on it. We enjoyed a mini date; walking around the city and having lunch. On the way home, Big Brother crashed hard. Overall we had some fun moments and despite the battle, I’m really glad we went. But in the end, I would said the score was New York: 1 Us: 0. You know what one of the hardest things about being in the city was? Navigating a toddler/stroller. It’s obvious when Jay Z claimed there was “nothing you can’t do” in NYC, it was before baby Blue came along. The New York subway is just NOT stroller friendly and so every time we had to travel from one place to the next, it was a massive up hill battle to navigate getting down flights of stairs, through the uber narrow turnstiles, not being run over by the fast-moving tide of New Yorkers. I think after this trip, it’s safe to say I don’t want to return until we’re out of stroller world. Maybe if we had just stayed in Park Slope with the fellow stroller brigade we would have had less of a battle to fight. So, you won this time, big city. But we’ll be back. (In about a year or two…) And next time we will be healthy, strong and stroller free and ready to take you on!