“There is magic in the night when pumpkins glow by moonlight.”

We have lived in our neighborhood for nearly two years now, yet before we moved to our street we had visited it every Halloween for several years. For over fifteen years, my block has been famous for its Halloween flair. Every year, my neighbors get together a few weeks before Halloween and pick a theme beyond just your standard ghosts and goblins and decorate the houses in that theme. The street shuts down to car traffic and as the Halloween evening rolls along, it becomes a massive street party. It’s fun and safe for the kids and entertaining for the adults as they stroll through the block admiring our house decorating skills. In the past the block has done everything from Harry Potter to Pixar films. 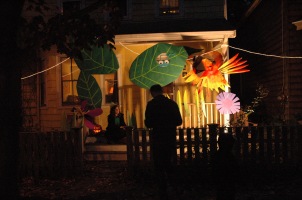 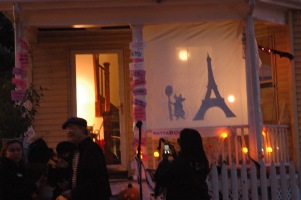 This year it was decided to do bugs and insects. Some houses were decorated with direct interpretations of the theme such as a ladybug house or a spider house and others stretched it out a bit with a Beatlejuice house, a computer bug house, and an exterminator house. We chose The Beatles. My boys are huge fans. At two years old,

Big Brother knew all the words to Yellow Submarine (as well as many other Beatles hits) and even decided to BE a yellow submarine for Halloween that year. Thankfully, my pack rat tendencies paid off and I was able to reuse his old Halloween costume in our house decorations this year. Even though preparing for Halloween was a bit crazed this year as we were days away from the demolition phase of our house renovation, we still had a lot of fun pulling it all together. The whole family participated in putting together our decorations. Big Brother single-handedly cut out and assembled the Octopus’s Garden, both boys helped their dad spell out the Beatles for our Sgt Pepper display, and my husband pulled together a stellar Beatles play listed that blasted out of our window all night long. 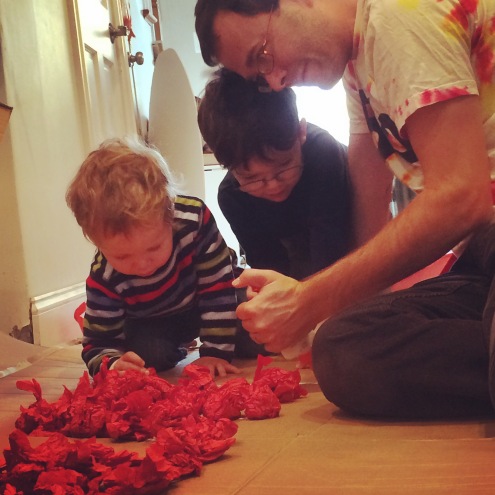 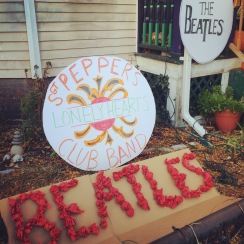 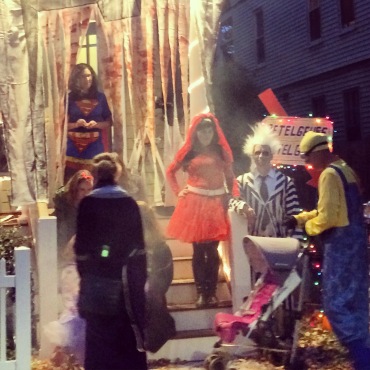 Trick or treaters were delighted as they walked by the house. Multiple older neighbors came by to share their favorite Beatles memory and their love for the band. Kids danced and lingered in the street in front of our house enjoying the music. Maybe one of the strangest aspects of this night is that people stop to photograph our house all night long. That part I still haven’t gotten use to…I mean I get it….before this was my house, I did the exact thing. I remember the year that the theme was Pixar, the previous owners had done a phenomenal job of decorating the house like the movie Up. And I took pictures of it! It was a weird experience when we were going through the process of actually buying this house and looking back on a time when I was just a part of the trick or treating crowd admiring and photographing the house, and now that house was becoming ours! I would have never imagined it then.

So clearly, we knew what we were getting into when we bought the house. Or at least we thought we did. But nothing to could prepare us for what it’s really like to be on display and handing out candy for nearly four hours straight. I was astonished last year to discover that we served somewhere between 1,200 and 1,500 trick or treaters. Can you imagine!? It was so overwhelming! I learned a few lessons that first year. First was to call in for back up. I was so swamped with handing out candy that first year that I didn’t even get a chance to go trick or treating with my own kids! So this year, we invited friends and family over to take shifts so that we could take the kids trick or treating and take breaks. Turns out, Little One LOVES handing out candy to trick or treaters. It was adorable seeing my little two-year old hand over lollipops wishing everyone a Happy Halloween and even telling various people that he liked their costume. I enjoyed the experience a lot more this year as I was able to sit back and just be in awe of all that was going on around us. 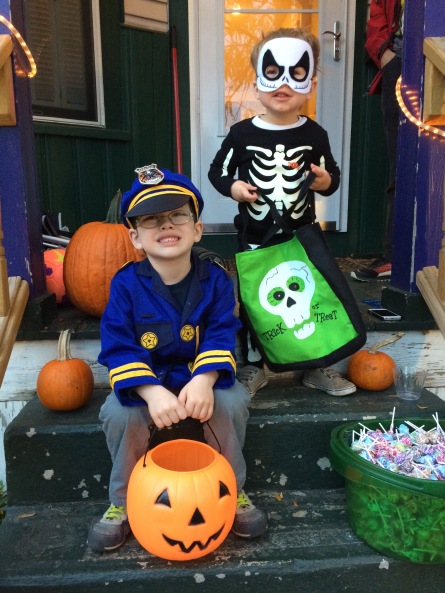 One thought on “A Few Small {Halloween} Moments”