Threenager – noun \thrē-nāj-er\: 1. a three-year old who has the general attitude, angst, and mood swings of a teenager. 2. the ruler of the roost.

Little One had his birthday this week! A three-year old’s birthday is one of the best birthdays because it is the year in which they really understand the joys of their big day. The first birthday, they’re oblivious. The second birthday is fun, but still slightly clueless as to what all the fuss is about. But by the time they reach three…it’s game on. They get the concept of gifts, cake, candles, and a party all for them. And for both of my boys, three was the first time they found the fine motor ability to actually show their age in fingers.

He has been counting down the days for over a week. Despite my distaste for buying into commercial driven characters, he has developed a healthy-ish obsession with Spider-Man. Whenever asked, all he wanted for his birthday was to be drowning in everything Spider-Man related. Years ago, the naive parent in me made the declaration that I wouldn’t have kids that were into the commercial world of superheroes and princesses. But then you realize that it’s nearly impossible to say no to something that brings them so much joy. So I gave up that battle and bought him everything Spider-Man. Legos, books, t-shirt…on and on. And he has loved every single bit of it. He enjoyed a birthday full of fun new toys, a trip to the bowling alley, bubbles, and lots of chocolate cake. He was super happy. 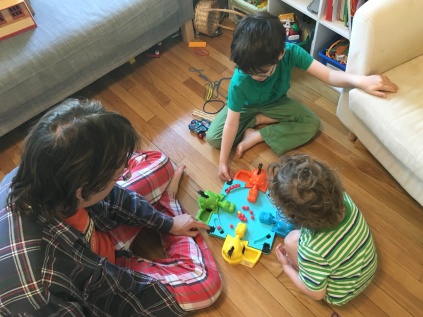 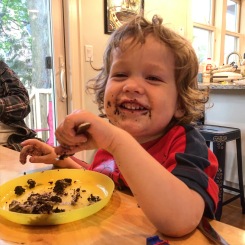 I have a love/hate feeling for this age. On one hand, three-year olds are inquisitive, snuggly, loveable, thoughtful, and enthusiastic little people. I love the conversations I have with Little One…learning about how he thinks and talking about all of his wonders and views. There is much innocence and delightful insights in how he experiences the world. I love that when we sit down to play, it always starts with, “Ok, Mama, let’s pretend….” and then he gives me a long list of directions into his world of make-believe. In addition to the playful joys, with a newborn in the house his new-found independence and self-care abilities are also helpful for me and confidence building for him. Settling into a big brother role has introduced this once baby of the family to try on his caretaker hat and for the most part, he’s super sweet and loving. He’s really taking the job of big boy seriously most days and it is clear it makes him feel proud.

But there is a darker side to three-year olds. It seems that most days are an uphill battle for Little One (and therefore Mama, too). Without reminders to talk like a big boy, most desires are expressed through a constant state of whine. Managing the minefield of a three-year old is a delicate balance of power. It’s creatively offering choices that allows him to feel like he has power. And most days it takes a great deal of enthusiasm, creativity, and positive energy coming into each battle, which is often a challenge for me in my newborn induced sleep deprivation. If I can find the patience to present things in an upbeat manner, he responds accordingly. And then there are days when no matter how things are presented, it is all wrong. And that’s just the beauty of a threenager. Just when you think you’ve mastered the art of interacting with a three-year old, they throw you a curveball and change the game all together. Thank goodness it is all temporary. Having already traveled this road with Big Brother, I know there’s an end in sight. And in a blink of an eye, I’ll have real teenagers on my hands.

One thought on “The Joys and Struggles of a Threenager”