“The road won’t always be easy but it will be worth it.”

The other day a friend pointed out that with all the build up and talk about our kitchen and dining room renovation on the blog (you can read about here, here and here), I never followed up with a proper post to show the end result. I neglected this post not because we aren’t pleased and proud of what we have now, but the anticipation and arrival of a certain Baby Girl had me (and still has me) rather distracted.

The renovation was a long and hard road. What was meant to take about 8 weeks (which looking back seems laughable) ended up being about four and a half months. Thankfully we had the most amazing construction team working on our house who were so lovely to be around, they became like family to us during that time. Our living space was condensed to about 125 square feet and we were without a kitchen & dining room. So no place to cook or store food, no place to eat, no sink to wash dishes. All during the coldest and darkest months of the year over two major holidays (Thanksgiving and Christmas) all while I was pregnant with two rowdy boys bouncing off the wall. A pure shit storm and an ultimate test to our strength and ability to cope. My husband and I lovingly joke that if we could make it though that…we can make it through anything.

It’s hard to show an exact before and after photo because the transformation to the back of our house is drastic. Walls came down or moved, new windows or doors were erected and it is barely recognizable from what it once was…which was the goal. I also did not have enough foresight to take a good before photo of the rooms for comparison (there was a lot going on). But I sifted through all my old photos and found a few that will help show the before. In fact, several of the before photos of the kitchen are photos from the previous owners of the house when they were selling the house (because, when you’re selling a house, you have more motivation to just photograph the room..)

When we bought the house, the kitchen cabinets and counters were relatively new and nice, but the layout wasn’t working for our family. Our goal in this renovation was to make our space more open, bring in more outside light, and a better distribution of square footage. We also wanted better access to the postage stamp of a backyard that we have and to be able to let the kids play outside while being able to see them from inside. The actually amount of square footage that was added to the house was a mere 17 square feet but because of the improved layout and easier access to the back yard, it feels way bigger.

The kitchen went through the most dramatic transformation. Before our kitchen offered very little counter space, the window over our sink stared at the siding of our neighbor’s house, and the kitchen was closed off and separate from the dining room. And though there was some light coming in from outside, there was no way to actually see the backyard while in the kitchen. Though the wall of pantry cabinets in the nook off the kitchen was great, it was actually way more pantry space than we needed and therefore it was wasted space.

Now, we have ample counter space, including a peninsula with an overhang so that the kids can sit at the counter (which is where most meals happen these days). Our sink is now overlooking the backyard with a huge five foot wide window. After taking down the wall between the kitchen and the dining room, it has opened up the space and brought the rooms together which is lovely for our everyday life, as well as when we’re entertaining.

Before the renovation, the dining room was always cramped. True, we have a massive dining room table, but with five people in our family and a large extended family, it is a necessity. Though I did love the built-in china cabinet, the rest of the room just did not give us what we needed in a dining room. We needed way more light and more room to move around. It can’t be seen in the above before picture, but in addition to a very large dining room table, our dining room also housed our piano, which blocked most of the window.

During the renovation, the wall that was left between the kitchen and dining room was moved back towards the kitchen about two feet giving us extra space in the dining room. This opened up space for a sitting area just outside the dining room, so with furniture moved out of the living room, we had room to move the piano into the living room. One of my favorite pieces of the entire renovation is that massive sliding glass door. That floor to ceiling light just changes the entire feel of the room. When my kids are out playing, I have them in clear sight. It provides an awesome cross breeze with the screen door and it is a much more pleasant view than before (which was basically no view at all!)

The changes we have made have really improved the flow and rhythm of our life. I can cook in my kitchen and still be with the family while they hang out at the table, counter or even in the living room. I really enjoying being able to look out into the backyard and have the freedom to let the kids play outside without me. Our backyard has become another living/playing space that we never were able to use to its fullest potential.

Before the renovation, I felt like the walls were closing in on me at times, but now everything feels much more spacious and there’s room to move. Granted, in the end, we still have a tiny urban house compared to those out in the ‘burbs, but I’m really proud that we’ve found a way to make our little city house work for us. It has always been important to us to maintain an urban lifestyle and this change has helped us to make it work. 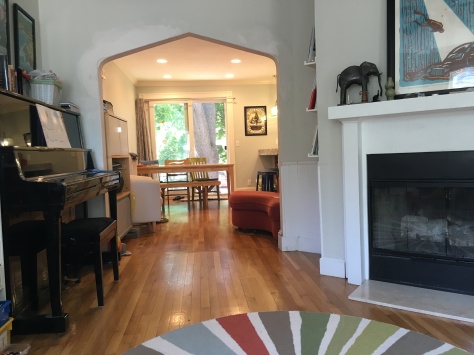 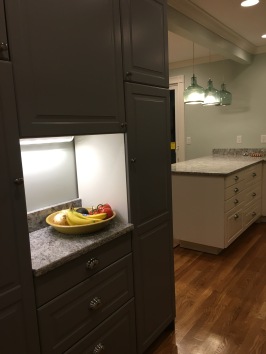 4 thoughts on “Renovation Completed: Before and After”