“If you give a mouse a cookie, he’s going to ask for a glass of milk. When you give him the milk, he’ll probably ask you for a straw. When he’s finished, he’ll ask you for a napkin.” -Laura Joffe Numeroff

It’s a snowy New England morning and my oldest is sitting at the table attempting to create a 3-D dragon out of paper. As he finished, I can tell he is feeling slightly frustrated with his results and announces he wants to get an origami kit so he can learn to make animals with paper. Rather than suiting everyone up to head out into the snow to our beloved Michaels, we decide to use resources readily available at home: printer paper + a quick search on the internet. In no time he’s creating a talking dog, a ladybug, and a hopping frog. And thus begins his winding road of self-directed learning for the rest of the day.

While decorating his hopping frog he starts throwing out all the questions popping into his head about frogs: can frogs have designs on their backs? what do they eat? where do they live? So many great, curious questions! A few months ago, my husband upgraded his work computer and he passed on his old laptop to Big Brother to use. In these moments of curious questioning, I have been modeling how to search out his own answers through the power of the internet. We spent some time Googling (and asking Siri, one of his favorite things to do) the answers to his questions. After reading a few frog facts found on various websites, I decided I was doing too much of the reading. He needed to steer this ship. 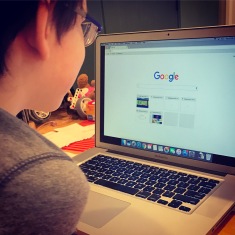 Back in September, along with a group of more than fifty homeschooling families, I bought a discounted membership to a collection of reading and science literacy resources and it has proved to be invaluable to our family. We use it as a little library at our fingertips. Their selection of fiction and nonfiction leveled books has made so many topics and stories accessible to my emerging reader. He can feel empowered by his new-found ability to read for enjoyment as well as research. I am guiding him to becoming a successful, self-directed learner and showing him he can seek out and find whatever answer or knowledge he craves.

He read two books about what frogs eat and pond life. After reading about ponds, in his excitement with realizing the power of Google, he decides he wants to research pond animals in general. At this point, I feel like our life is emulating If You Give a Mouse a Cookie except the title should read: If You Give A Homeschooler A Computer. He gets drawn into looking at diagrams of pond animals and I get a flashback to my days in the classroom when I taught a unit on this very topic. All those teaching materials, that I stored away in the basement (much to my husband’s dismay) for those what if moments, were all of a sudden coming into play. There he was, my unschooling homschooler coloring, cutting, and gluing a <GASP!>  worksheet. 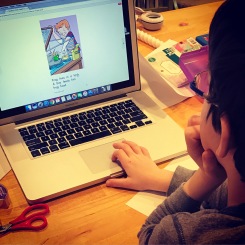 I have a very complicated relationship with worksheets. As a teacher, they were all too often just filler. Busy work. Morning work. Often a means to an end, sometimes completely unrelated, such as taking attendance or even working with a smaller group of students who needed extra attention. Rarely did I feel inspired or proud of having my students doing worksheets. In fact, it was one tiny driving force in choosing homeschooling for our family. The idea of my children having uninspirational worksheets pushed in their face so the teacher could lead a small reading group made me cringe.  But fast forward to our current homeschooling life when we stumble upon a moment in which a worksheet is meaningful and productive. Ironic, no?

He looked over the worksheet and decided to spend some time reading about each of these animals, specifically finding out their correct color because he was concerned with accuracy. I’m forced to embrace that not all worksheets are a waste of time. Never are they my first choice. If this had been a warm spring day, we would have grabbed our boots and been out the door on a mission to find a pond to explore. But on a snowy day in February when your boy is motivated to study ponds, a charming worksheet will have to do.

With careful attention to coloring detail and precise cutting and gluing, Big Brother proudly showed off his pond diagram by hanging it up on his bedroom wall. While staring at the wall and admiring his own work, he decided he wanted to go recycle bin diving for supplies to make a diorama of his pond. With a stack of construction paper, an old Amazon box and a few of his original drawings he made a pond and its creatures come to life. As if that wasn’t enough exploration of frogs & ponds, he then goes on to write a Once Upon A Time story that ended with a frog meeting his demise after crossing a snake, then played a rambunctious game of hopping tree frogs with his brother and chilled out with a few nature videos about ponds, including this super charming one I found on PBS that oozes the innocence of early 80s (aka the golden years of my childhood). Now there’s talk of raising tadpoles when spring arrives, which will require its own rabbit hole of research on guidelines for growing frogs and frogs that are native to our area and a trip to some local nature centers for more information. 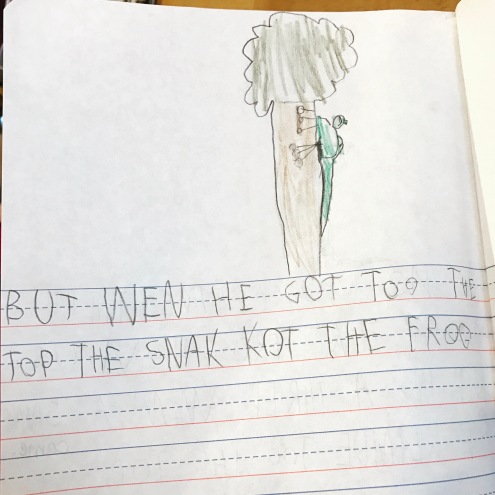 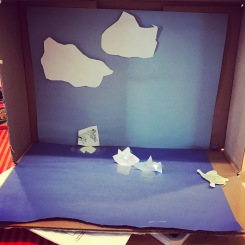 And how did this all get started? Oh right, he “failed” at making a 3-D paper dragon. That entire day was driven passionately by his pure curiosity and eagerness to learn. The teacher in me can’t help but go back and check off the list in my head of all the incredible learning moments that was there: the science, art, technology, literacy, critical thinking, fine and gross motor skills, research skills, creativity, and self-motivation. All this launched from a failed paper sculpture. I couldn’t have planned it any better. In fact, had I planned it, it would not have been anywhere near as meaningful or as motivating because it would have been my learning goals imposed on him. And that is just not how children, or all people for that matter, learn.

One thought on “The Winding Path of Self-Directed Learning”